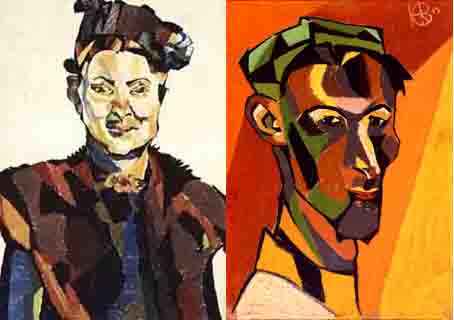 Sophie Brzeska – Gaudier left a few hundred manuscripts that were never before published, most of which she had written in French and English.

Her first book was published 83 years after her death thanks to Gillian Raffles, a researcher and collector of works of Henry Gaudier Brzeska, an artist with whom Sophia lived in an informal relationship until his untimely death in 1915.

The book prepared by Gillian was published in 2008 in London by Mercury Graphics in a limited collectors’ edition of 125 copies.

Thanks to the financial support from the Ministry of Culture, Science and National Heritage the book „Mother and other writings” in the translation by James Jedliński will be introduced to the Polish market in May 2014.

Sophie Brzeska died on March 17th 1925 in the mental hospital in Gloucester, England. In her death certificate her occupation was stated to be a writer, even though her only book has been published 83 years after her death.

On admission to the hospital her mental state was defined as insanity. Her neighbors, who alerted the social services, claimed that for several weeks Sophie did not leave her rented room and there was no contact with her. Because she lived alone, her property was confiscated and the treatment period was subject to the jurisdiction of the hospital. The contents of the boxes that were found in her room contained 25 sculptures, 1630 drawings and 13 oil paintings, all by Henry Gaudier Brzeska. Among a myriad of correspondence, notebooks and pieces of paper with handwritten notes, there was a never sent letter addressed to Romain Rolland, a French writer and Nobel Prize winner. The letter was opened only in 2005 by Gillian Raffles. The contents of this letter were notes written by Sophie in English and French, collected under the title of “Mother”.

Sophie Brzeska and Henry Gaudier first met in 1909 at the Bibliothèque Sainte Geneviève in Paris. For Sophie, at that time a 38 year old governess, the city was supposed to be the last stop. Dissatisfied with her life and lost in desperation after having suffered the betrayal of the man she loved, she came there to write a book about her tragedy and commit suicide. Everything changed when she became an object of affection for less than 19 year old boy, who used to study anatomical drawing in the evenings at the same library and who was watching her closely. Soon Henry realized that he was certain of two things in his life: one being that he was to become a great artist, and the second one – that he was in love with Sophie. They decided to live and work together in London, and their plans to leave were hastened by Henry’s appointment to the army. The common life at the new site became the beginning of their most difficult and most magnificent period of their lives and artistic creativity, that was prematurely ended with Henry’s departure for the French front.

Living in London, Henry and Sophie have created a kind of myth, a legend of Gaudier Brzeska, which became an inspiration for artists. Their tragic fate described by Harold Stanley Ede in his book entitled “The Wild Messiah”, which was filmed by Ken Russel in 1972 under the same title.

In 2008, Gillian Raffles published Brzeska’s book, a work that can be most properly described by the words she herself wrote in her introduction: “Sophie, until the publication of this book, could only be known by the relations of others, who watched her life alongside Gaudier, but now is the first time to hear her story, narrated by her own words.”