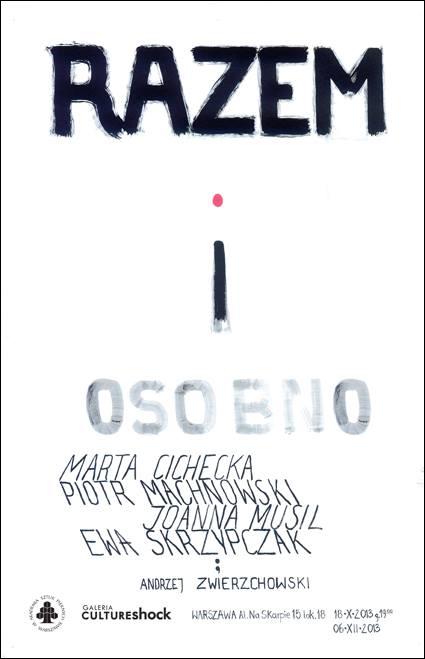 Why “Together and separately”?

Marta Cichecka, Piotr Machnowski, Joanna Musil, Ewa Skrzypczak studied at the Academy of Fine Arts in Warsaw at the same facultie (Interior Design) and at the same time. They are the generation that have acquired (and still gets) the “general” and artistic awareness “a few years after the turn” (1989). At the time already multipolar, not a black-and-white, or better said red-and-white.

More choices, earlier responsibility for themselves. This and not any another reality determines their attitudes, shapes their personality. They react differently to this reality, they place their attention and tension in different “spaces” and that significantly distinguishes them, making them separate. At the moment – in their time energy to action is important. It seems (judging by the paintings) that they made the selection. Now it is the time for development, through in-depth self-criticism.

Ewa Skrzypczak (1985)
She graduated from the Faculty of Painting at the Academy of Cracow and the Department of Interior Design at the Academy of Fine Arts in Warsaw. She has participated in several group exhibitions in Poland and in the international painting exhibition in Beijing (China) on the NY Arts Magazine invitation. Apart from painting, she is fascinated by photography.

Piotr Machnowski (1989)
In 2013 he graduated from the Faculty of Interior Design at the Academy of Fine Arts in Warsaw. In the same year he participated in multimedia workshops at the Fryderyk Chopin University of Music and received the accreditation from Transmediale and CTM festivals, where he was a reviewer. He listens to jazz and unspecified compositions. Since 2004, he has been participating in numerous jam sessions, without workshop preparation, but reliably giving in to the nature of sound and its dynamics.

Marta Cichecka (1990)
She graduated from the Faculty of Interior Design at the Academy of Fine Arts in Warsaw. She completed a study of Stage Design in Atelier Foundation. She runs her research in the areas of painting, design. Marta is inspired by nature, cats.

Joanna Musil (1984)
She graduated from the Faculty of Interior Design at the Academy of Fine Arts in Warsaw and the School of Visual Arts and Visual Techniques, specialization stage design. Currently she is engaged in interior design and scenography for photo shoots and TV commercials. In a moment of reflection she creates works through painting techniques and batik, which are characterized by a melancholic atmosphere.

More photos (from preparations for the exhibition) can be found on Facebook.